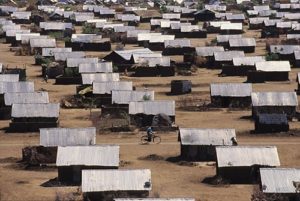 A Third and Final Home-[Documentary Summary: The twelve-thousand Somali Bantus living in the Kakuma refugee camp have the perversely unique distinction of being a thrice-displaced people. Situated in the northeastern corner of Kenya, Kakuma has been the Bantus’ latest home after being forcibly displaced several times: first by the eastern African slave trade several hundreds of years (to enslavement in Somalia) and second by the disintegration of the state of Somalia in 1991 (to refugee camps in Kenya). Barred from returning to their ancestral homeland, the Bantus are on the move again, this time to the United States, in what will remain their permanent new home. I traveled to Kakuma in the Spring of 2004 to document life in the refugee camp as well as the Somali Bantus long-awaited journey to their new home.]
-Untitled Photograph-As the punishing sun begins to heat up the morning, a lone Somali Bantu biker cuts through the “streets” of Kakuma, past houses made of mud-brick and topped with tin roofs.